It was another venture as we chose to take our networking programme to another angle. This time I and a few colleagues decided to add to our list one of the largest and oldest organisation in the world. Our destination this time was to the United Nations Office at Geneva. Our journey started on Monday March 23rd, 2015 with a bus trip to Copenhagen followed by a two-hour flight to Switzerland. We were sixteen in number blended with students from other parts of Sweden. We had to rest on the arrival day Monday. Tuesday, our first meeting kicked off with the Senior Legal Adviser, and United Nation Representative of the International Commission of Jurists.The discussions and questions featured United Nations programme on economic, social, cultural, and business rights. Our discussion also highlighted human rights issues in parts of Africa, Europe, and Asia.

In the afternoon, we join the human rights session at Palais Wilson where we attended the 113th session of human rights council. The session was on Human right in Monaco. At 17:00 we decided to embark on the pre-planned networking events with law students from the Geneva Academy.

The next day, Wednesday morning we proceeded with a meeting at the UN offices with the President of Geneva for Human Rights Adrien-Claude Zoller, who is also in charge of Global Training. The meeting started at 9:00 -12:00 focusing on global politics and human rights. We then progressed in the afternoon to the Human Rights House Foundation where we discussed current global security, human rights, and the current political situation in Europe. It was a unique day as we tested our brains on global politics, world leadership, and current affairs. 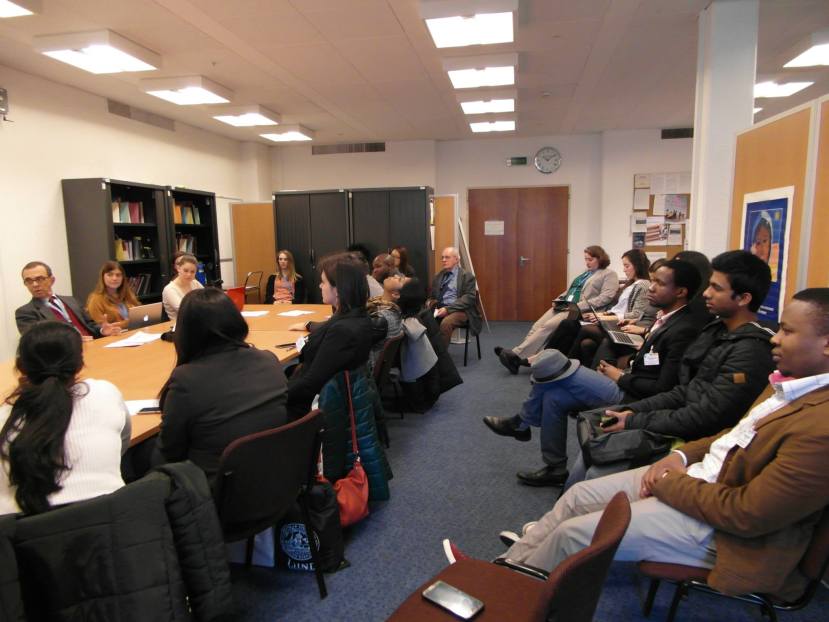 On Thursday, we decided to have a general tour at United Nations offices. The tour started at 10:00am and lasted for one hour. Later we went to the association for the prevention of torture who were waiting for us. Our discussion with them featured torture prevention in society and various mitigation strategies.One discussant was a Swedish who was excited to see students from her country.

Friday morning was our returned date and by 9:00 we were already at Geneva airport ready for our flight back to Sweden via Copenhagen. It was an interesting experience blending human rights, global politics, law, engineering and above all creating a global network.

More photos from the trip